The Popularity Award of the Year 2020, granted for the second time this year, was won by Laura Bosneag, Sales Manager of NOVOMATIC Romania.

Held in the beautiful setting of the Game World Bucharest Mall, the host of the broadcast, the 14th edition of the Gala of the Grand Awards of the Romanian Gambling Industry, announced its winners.

In an atmosphere full of music and good cheer, the host of the show, Codrut Keghes alias Dezbracatu’, presented one by one the 2020 champions of the Romanian gambling industry.

The “Popularity of the Year” section, a section in its second edition and based on the number of views of interviews with industry representatives, interviews posted on the TV channel Casino Life & Business Magazine on Youtube, was dominated by an interview from Saturday’s Interview series, since April 2020.
The Popularity Award of the Year 2020 thus belongs to Laura Bosneag, Sales Manager of NOVOMATIC Romania.

The topic approached, the sincere and direct dialogue but especially Laura Bosneag’s answers from that interview made the readers interested and view, in large numbers, this interview, which automatically attracted this Special Award offered annually by our magazine.

Partners of the 14th edition of the Grand Awards of the Romanian Gambling Industry Gala were:

The full article on the 2020 edition of the Gambling Industry Grand Awards Gala can be found HERE.

The champion of the Grand Awards Gala in 2020 was BETANO 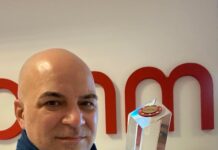 The Grand Award for Collateral Services offered to Industry

The title of Manufacturer of the Year 2020, granted to NOVOMATIC